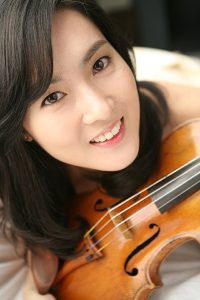 A versatile violinist, Ms. Yuri Cho gave her first performance at age 10 at the winner’s concert of Korean Newspaper Music Competition in Seoul. Since entering the Menuhin School, she had the rare honor to perform the Brahms sextet with Lord Menuhin in Buckingham Palace at age 15 and was selected as a soloist and a Concertmaster of the Yehudi Menuhin Orchestra in the 1993 Europe tour with Lord Menuhin conducting.

Cho began her musical education at the Yehudi Menuhin School. She also earned a Bachelor of Music degree from the Guildhall School of Music and Drama and a Master of Music degree from Eastman School of Music. She has completed all of her coursework for Doctorate of Musical Arts degree at the Eastman School of Music, where she was also a teaching assistant of Zvi Zeitlin, Distinguished Professor of Violin. From 2010–2011, she was a lecturer at the Kook Min University and Sang Myung University in Seoul, Korea and an Adjunct violin Professor at UNLV from 2012 until 2018. She is a faculty member of the Young Artists Orchestra of Las Vegas since 2016.