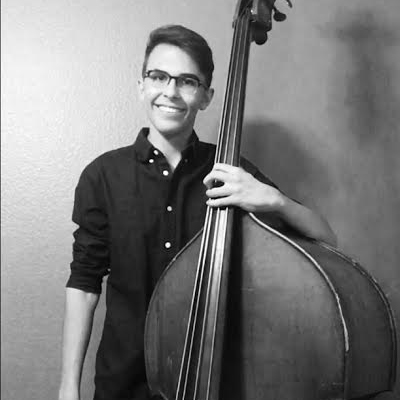 Andrew Munoz (b. 2001) is a double bassist who plays in his hometown of Las Vegas with the Youth Orchestra and the Young Artists Orchestra. Andrew started studying the bass when he was twelve years old under the tutelage of Elise Eden, a bass player for the Henderson Symphony and middle school teacher. Only a year later, he had already become a prominent figure in his school orchestra, earning himself and his ensemble a near-perfect score at the Middle School NMEA Solo and Ensemble Festival, as well as demonstrating the double bass as a solo instrument with Gabriel-Marie’s “La Cinquantaine”. By the time he was fourteen, Andrew acquired a Czechoslovakian bass built in the late 1800’s by an anonymous maker, which was previously owned by a number of unknown bassists before it was purchased by Andrew from Paul Firak, the principal bassist with the Las Vegas Philharmonic. Andrew spends a great deal of his time expanding his knowledge of music as well as attempting to evolve his playing.