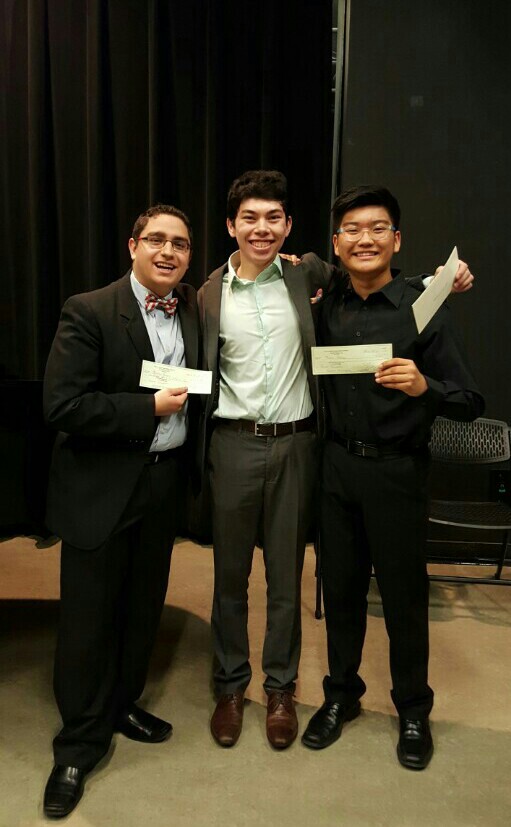 LAS VEGAS (March 14, 2016)- The Las Vegas Young Artists Orchestra and Music Director, Yunior Lopez, announce Matt Lazeroff as the winner of the 2016 Concerto Competition. Mr. Lazeroff performed Tchaikovsky’s “Rococo Variations” and was voted unanimously as the winner. Mr. Lazeroff received a $500 cash prize sponsored by the Foundation to Assist Young Musicians, and a $2,000 scholarship to attend the Montecito International Music Festival. Overall, there were (11) eleven competitors performing on violin, viola, cello, and double bass. The audience of 60+ people voted for their favorites to receive the “Audience Prize” of $300 cash. Two awards were given as the audience vote was tied. The first prize was given to violinist Thomas Kyong (14) who performed Bruch’s Violin Concerto in G-, and violist Giovanni Venezia who performed Bloch’s Suite Hebraique. Both received $300 cash thanks to Jonathan Krehm of Canzona Chamber Players series. The competition was live and open to the public who also participated in the voting process. In the end, the competition awarded $1,100 in cash, and $2000 in scholarships.

Matthew Lazeroff is a bright and talented cellist born and raised in Las Vegas. Currently 18 years old, he began studying cello at the age of 11 under the guidance of Robin Reinarz. Matthew has served as the principal cellist of the Las Vegas Youth Philharmonic for the past three years as well as the Las Vegas Academy Philharmonic, and CCSD Honor Orchestras. He has also received numerous awards and
recognition from competitions, earning 1st place in the Bolognini Chamber Music Competition in 2014 and 2015, the 2014 Silver State Music Competition, and was a 2015 NMEA Command Performance winner. Matthew has had the privilege of performing concertos as a soloist, playing with the Las Vegas Youth Philharmonic, the Las Vegas Academy Philharmonic, Henderson Civic Symphony and the Nevada
School of the Arts Chamber Orchestra. In his spare time he is an avid rock climber and slackliner. Currently, Matthew is studying cello at the University of Nevada Las Vegas with Dr. Andrew Smith also pursuing a double major in business management.

The Las Vegas Young Artists Orchestra, also known as the Young Artists Orchestra (YAO), is a professional training youth orchestra based out of Las Vegas, NV. Led by Music Director, Yunior Lopez, the orchestra unites the most talented young musicians up to age 22, who bring their creativity and exceptional musicality to over 10 concerts and events annually. Founded on the basis of educating and promoting young musicians, the Young Artists Orchestra is fully dedicated to the artistic, personal, and professional development of outstanding instrumentalists. Through a wide range of performance and instructional activities, the Young Artists Orchestra seeks to develop the skills and qualifications required of twenty-first century musicians. Under the Artistic and Musical direction of Yunior Lopez, the program offers detailed exposure to traditional and modern orchestral repertoire, collaborations with internationally recognized guest artists, in addition to its unique chamber music program. Moreover, it’s one of the few tuition-free youth orchestra programs in the United States. The 2015/16 concert season presents some of the best classical music Las Vegas has to offer. Performing at a professional level, the Young Artists Orchestra will venture into the works of Bach, Handel, Mahler, Mozart, and Piazzolla, in addition to new works by Bryce Dessner, Franghiz Ali-Zadeh, David Balakrishnan, and Osvaldo Golijov, some of which have been popularized by the Kronos and Turtle Island Quartets. The 2015/16 Season programs are made possible through the hard work of our family, friends, and sponsors. Please visit our Sponsors Page to view our supporters.

Photos of the Las Vegas Young Artists Orchestra are available on request,

The Las Vegas Review-Journal covers the Young Artists Orchestra. Click HERE FOR COMPLETE ARTICLE “For a…

The Young Artists Orchestra is the only tuition free youth orchestra in the State of Nevada. We are profoundly passionate about educating, promoting, and developing the musical talent of young artists. As a 501(c)(3) Non-Profit organization, we rely on volunteer and patron support. Find out how you can take part!
Donate Now
Copyright Dr. Shirley Linzy Young Artists Orchestra - All Rights Reserved
X